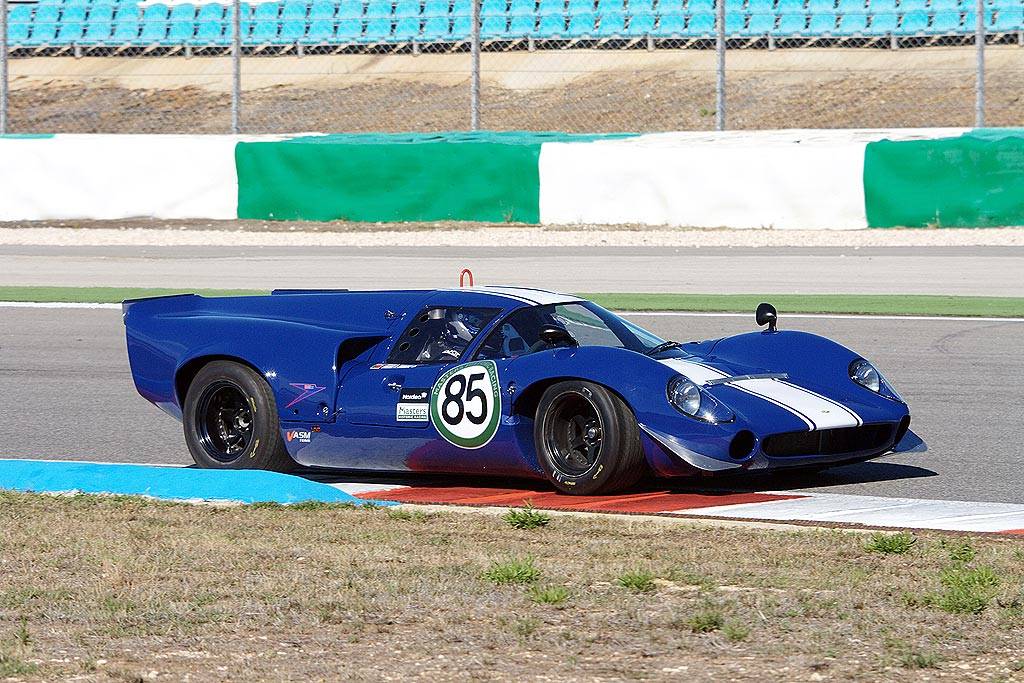 SL73/109 was delivered new as a Mk3 spider to John Mecom, the US Lola importer, on March 21st, 1967 and then passed to Carl Haas, who was in the process of taking over as the US Lola agent. Delivered in plain white and fitted with a Bartz Chevrolet V8, it was sold to Moises Solana of Mexico on April 11th, 1967. Entered by the Aztec Racing Team, Moises raced the car in the ’67 USRRC and also in Mexican track, road racing and hill climb events over the next two years before letting his brother, Hermann take over the car when Moises switched to a new McLaren M6B.

In 1970 SL73/109 was sold to Spurlock Taylor of Panama, Central America who raced the car for some time and won the Panamanian GP in 1970. It was donated in 1972 to the Indianapolis Museum where it resided for some years before being sold. 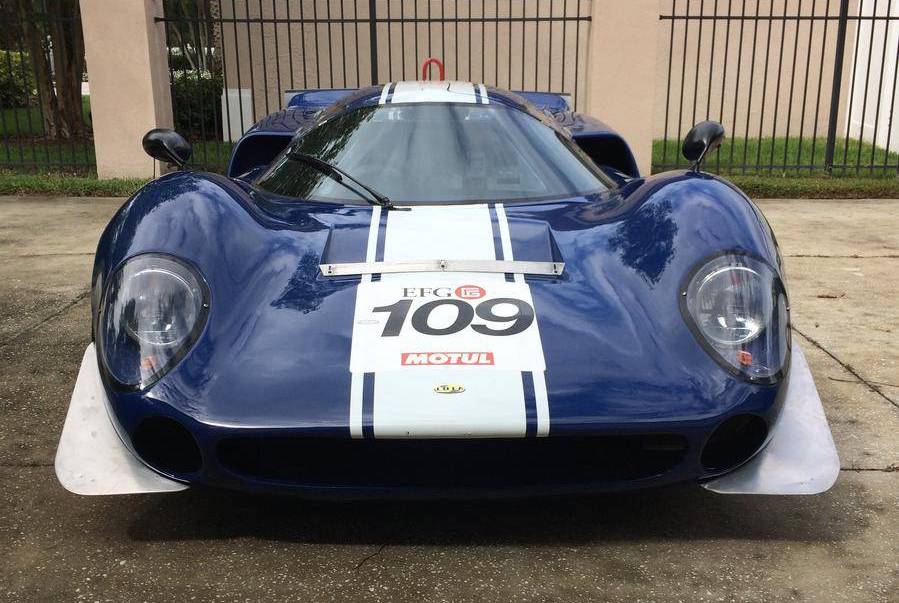 In July 1978, SL73/109 was then owned by Jeff Stevens who did some minor club events with the car thereby crumpling its nose. Chuck Haines bought the car on August 4th, 1987 from Jeff complete and with a Bartz Chevrolet V8, repaired the nose, and sold it on October 9th 1987 to Fernando Stirling of Mexico who in turn sold the car, on July 3rd, 1988 to Roly Nix in England for historic racing. Unfortunately, the car was damaged when it fell off its trailer on the way to an event. The damaged chassis was repaired, by Vin Malkie, chassis painted, and sold on October 4th, 1993 to Richard Dodkins (UK).

Richard Dodkins fitted a Mk3 coupe body by Clive Robinson, with no central white stripe, using a 6.3L Chevy engine, he completed the Lola. He then did extensive racing in England, Europe, and USA, together with sponsorship by AT&T. 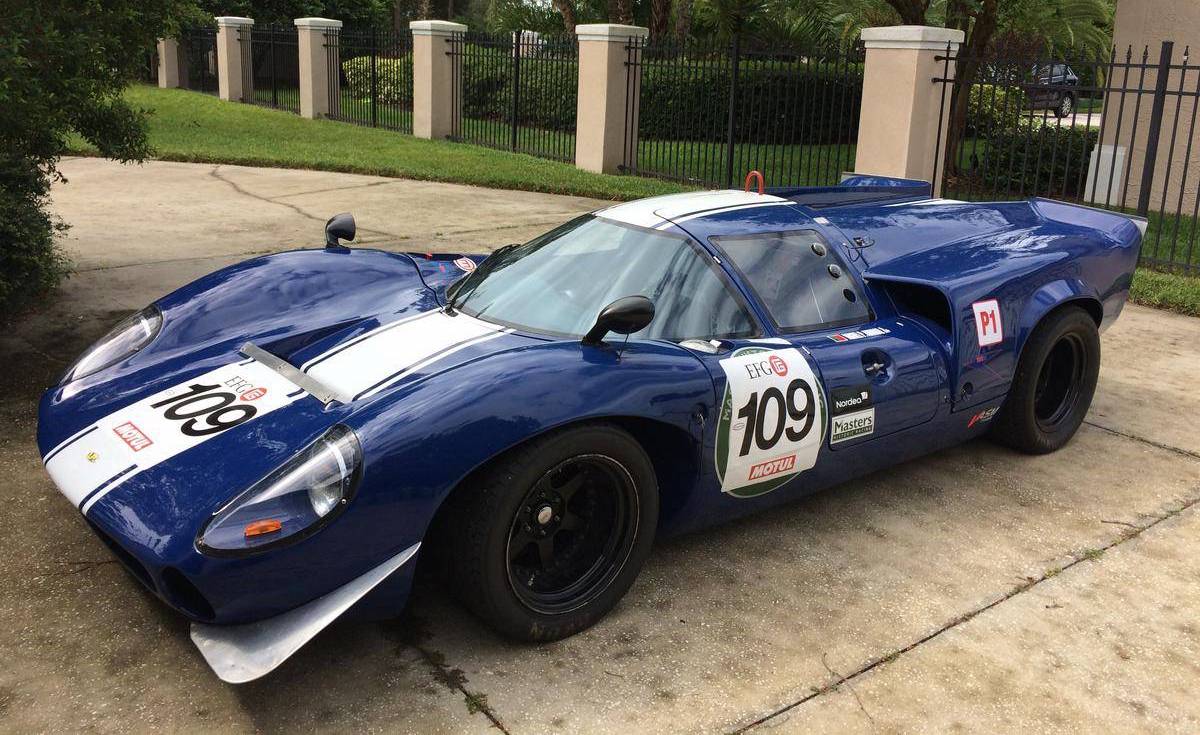 “In 1996, thirty thousand horsepower came into sight over the brow of the hill between the trees, pouring down towards Turn One. Formula one? CART? No; Historic racing, in the shape of the Can-Am Reunion, had returned to Road America, Elkhart Lake. Sponsored by Merril Lynch and organized by Brian Redman, the greatest gathering of the legendary Can-Am monsters saw no less than 57 of the no-limits sports racers take part in a ten-lap race around the beautiful four-mile circuit set in picturesque Wisconsin countryside. McLarens, Lolas, Shadows, Marches and McKees. some boasting up to 850hp and terminal speeds of over 200mph, took part. Driven by Richard Dodkins, it was the fastest small block engine car at the Can-Am reunion at Elkhart Lake.” 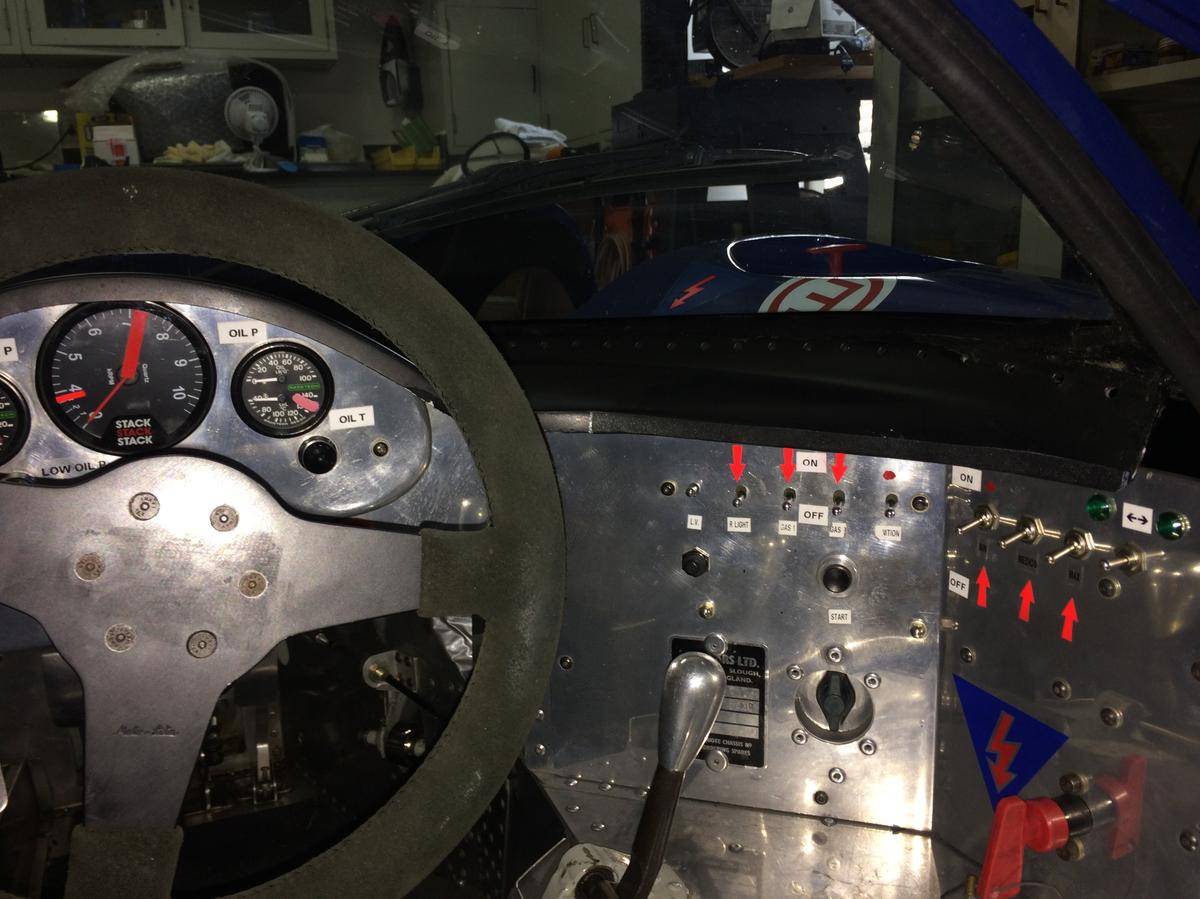 He sold Lola in April of 2000 to Miguel Amaral of Portugal, who spared no expense to maintain the car at a very high standard. Tim Adams updated, and refurbished the original 1967 engine in 2007 at 23K Euros, together with a total refurbishment cost of 47K Euros. Mr. Amaral campaigned it successfully for many years on the historic racing scene until a few years ago. Subsequently, the engine was rebuilt by Tim Adams in 2014 at a cost of 6.5K Euros, together with the rest of the refurbishment totaling 44K Euros.

As can be seen from the above, SL73/109 has continuous, solid history from new. 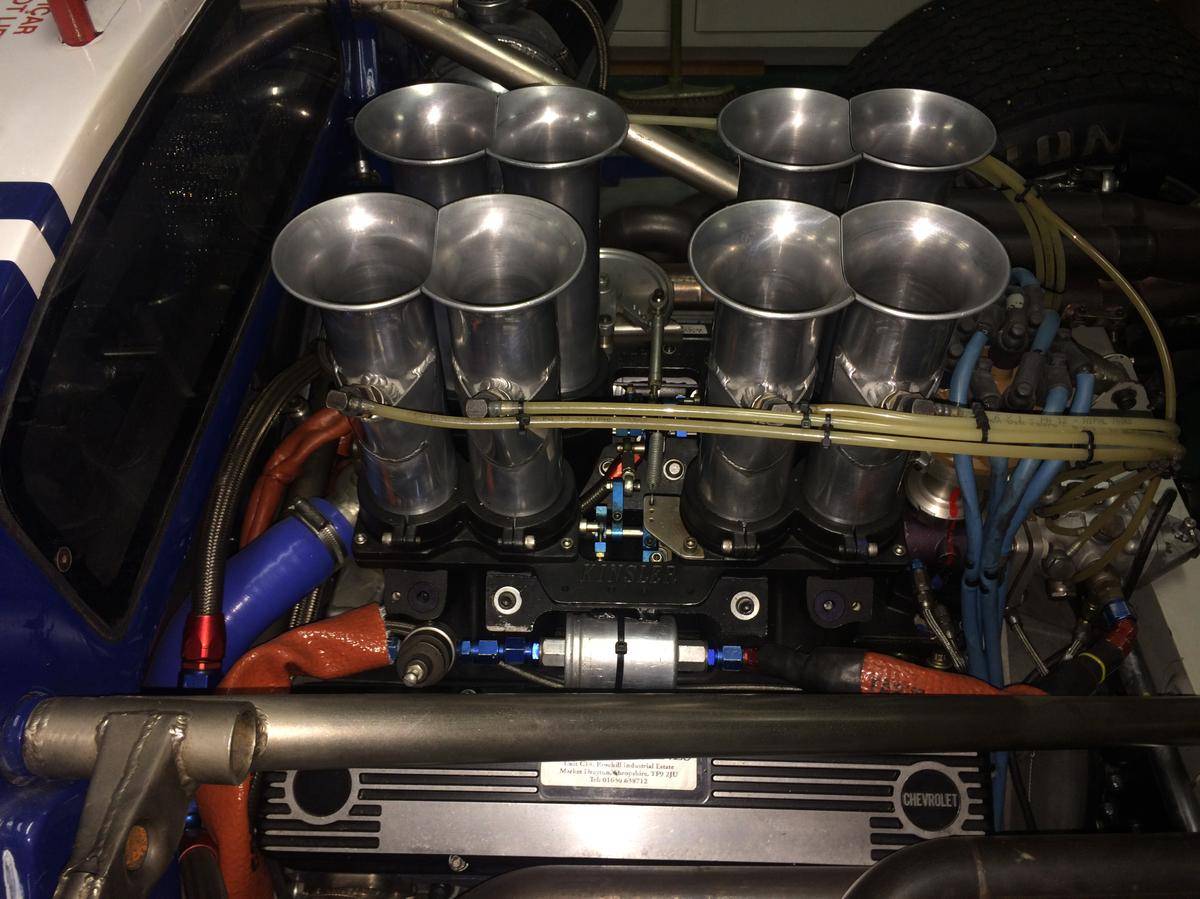 The car is in very good and race-ready condition throughout carrying a 5 liter small block Chevy Lucas injected engine of 550 bhp, with only 3 race hours under its belt. The LG-600 5-speed gearbox has been completely overhauled with all new gears, dogs and bearings. Two fire systems are current, crack testing per Appendix K is done and the fuel cell is new. Spares consist of a spare radiator, oil coolers, rear suspension arms, drive shaft CV joints, windscreen, and a host of miscellaneous items. Car has six wheels for Masters, 3 fronts 3 rears, all with Avon’s. The car also has 4 wheels for Peter Auto, 2 fronts 2 rears with new Avon’s uninstalled. 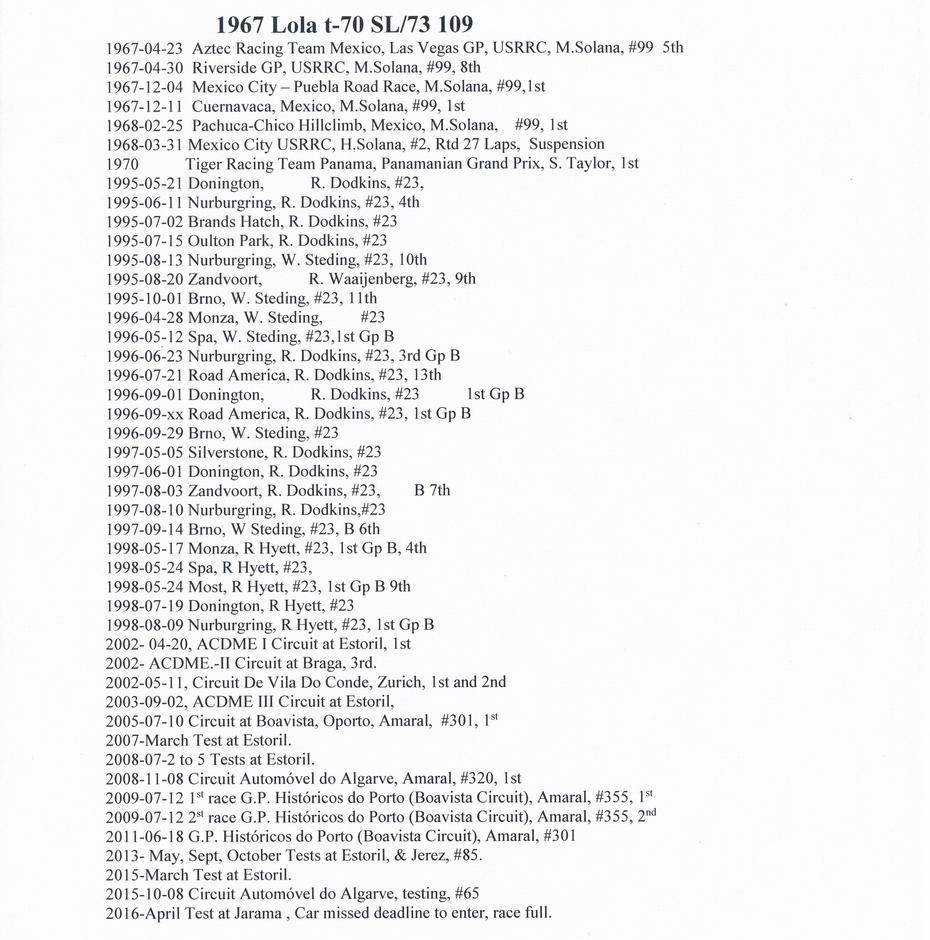 This impressive, long-term ownership Lola T70 Mk3 is eligible for all historic race events around the world including Sebring, Daytona and LeMans Classics.