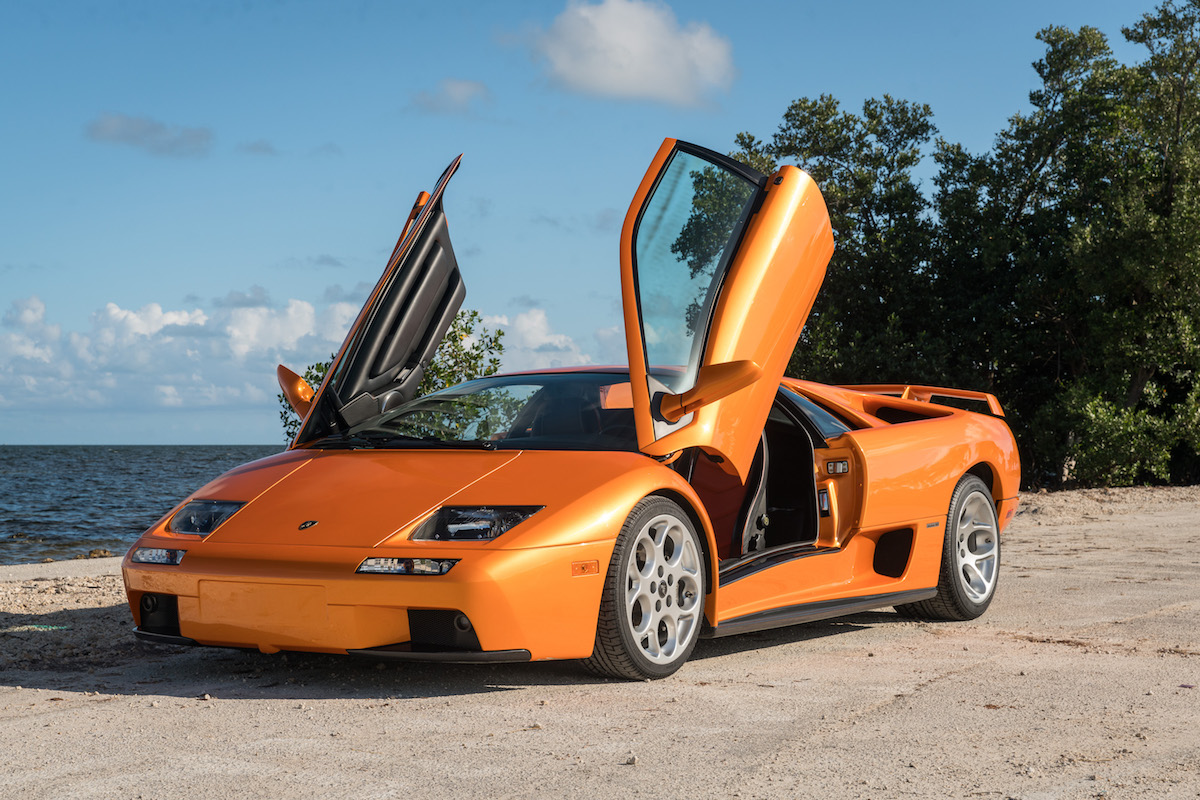 As the successor to the iconic Lamborghini Countach, the Lamborghini Diablo for sale had large shoes to fill. Plus, the automaker had big expectations for its next flagship as more competing supercars were hitting the scene. Lamborghini achieved its goal as the Diablo’s production run of 2,903 units beat the Countach’s sales numbers by more than 25%. That’s good news for collectors, too. While Diablos aren’t littering the marketplace, there are enough around to make shopping an exciting experience.

We’ll look at the highlights for each Diablo production variant built from 1990-2001. This information is helpful if you’re just curious about the Diablo or are considering buying one of these legendary supercars. Keep in mind that purchasing a Diablo will almost always involve a six-figure expenditure unless you come across an example with a bad history or something very unusual.

In pre-pandemic times you might have been able to grab an early Diablo for $150,000 or so, but those days are mostly gone. For a well-preserved Diablo with reasonable mileage, consider $200,000 to be the entry-level amount. More limited-run variants and later model examples can fetch double or triple this number.

With a production run of 529, the VT is another common Diablo variant. In addition to an improved V-12 (now with 492 horsepower and better acceleration), the standout feature is the addition of a four-wheel-drive system. With grip now on all four corners, Lamborghini markedly improved Diablo handling.

To celebrate the 30th anniversary of the automaker’s debut, Lamborghini produced 135 copies of the Diablo SE30. Engine output increased to 523 horsepower (torque still stays the same) and this version becomes the first Diablo to reach 0-60 in four seconds flat. A 1994-only subvariant, the SE30 Jota, offered 595 horsepower and a more aerodynamic exterior for racing homologation.

The automaker introduces the two-wheel-drive SV as the performance-value version of the Diablo. Pricing is similar to the base offering, but horsepower gets dialed up to 510 ponies, and an adjustable rear wing helps with aerodynamics. The model finally cracks the four-second threshold with a 3.8-second time for the 0-60 dash. For 1996 only, the company builds 34 copies of the race-oriented Diablo SVR.

Significantly, the 1999 Diablo SV benefits from a model refresh that drops the pop-up headlights and adds a reworked dashboard. The SV also becomes the “entry-level” Diablo. Lamborghini builds 346 units across five years of the SV. 1999 also marks the year that Volkswagen’s Audi Group purchased Lamborghini.

Lamborghini introduces the Diablo VT Roadster with a slightly revised front end (compared to the regular VT). Four-wheel-drive is part of the package, as is a somewhat detuned V-12. The 1999 model also benefits from the redesigned exterior with the fixed headlights.

The final years of the Diablo are marked by a larger 6.0-liter V-12 and a slightly restyled model. Horsepower reaches 550, and torque hits 457 lb-ft.—337 examples are made. 44 copies of the even more rare VT 6.0 SE (2001 only) are produced in either the exclusive Oro Elios or Marrone Eklipsis color.

Lamborghini Diablo For Sale By Owner