Ford GT. A name with a lot of history – from the incredible Ford GT40 of the 1960s, which won the Le Mans 24 Hour race four times in a row, to the GT of the last decade, which proudly carried the torch, giving a great modern take on its ancestor’s mixture of speed and beauty. Next year is set to see the arrival of the new Ford GT for sale, released to mark the 50th anniversary of the GT40’s first Le Mans’ race. The new model comes bearing a smaller engine, faster acceleration, and a whole host of other features that are set to bring the GT name hurtling into the present day. Here’s what we know so far. 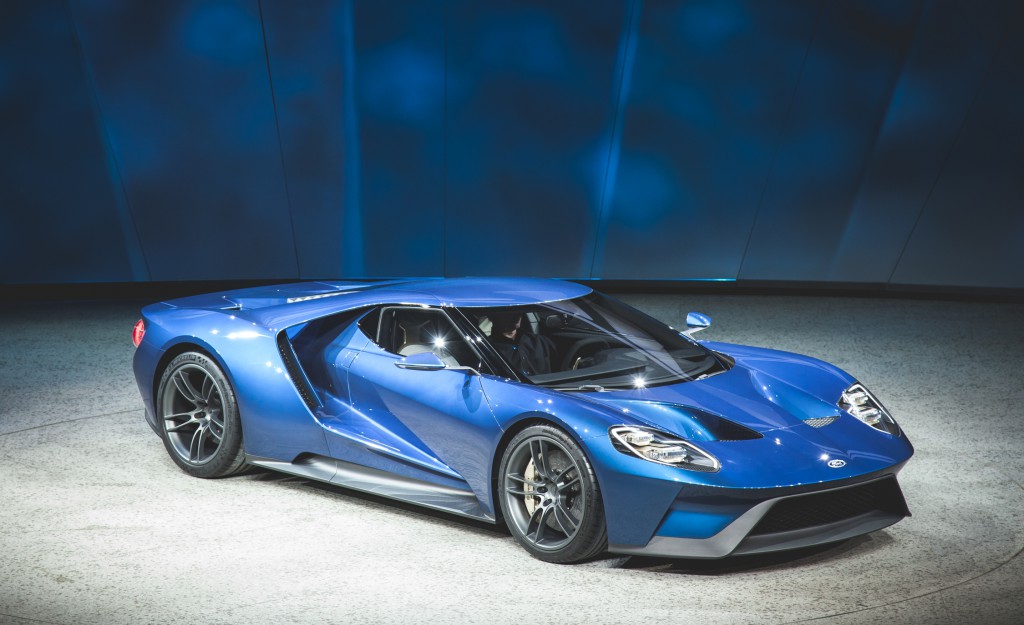 The car is set to be powered with what might seem an anathema to petrolheads, an Ecoboost engine, and a 3.5L V6 at that, as opposed to the 5.4L V8 that was found in the older GT. Just as with the McLaren P1 however, a smaller, more efficient engine, does not mean this car will be slow. Far from it. The engine will feature twin turbos, giving it more than 600 horsepower, and an expected 0-60 time of about 3 seconds, half a second faster than the 2005-06 GT, and will be able to reach speeds of more than 200 mph. This puts it in good standing with its competitors, such as the Aston Martin V8 Vantage, the Ferrari F12 Berlinetta, and the Lamborghini Huracan. 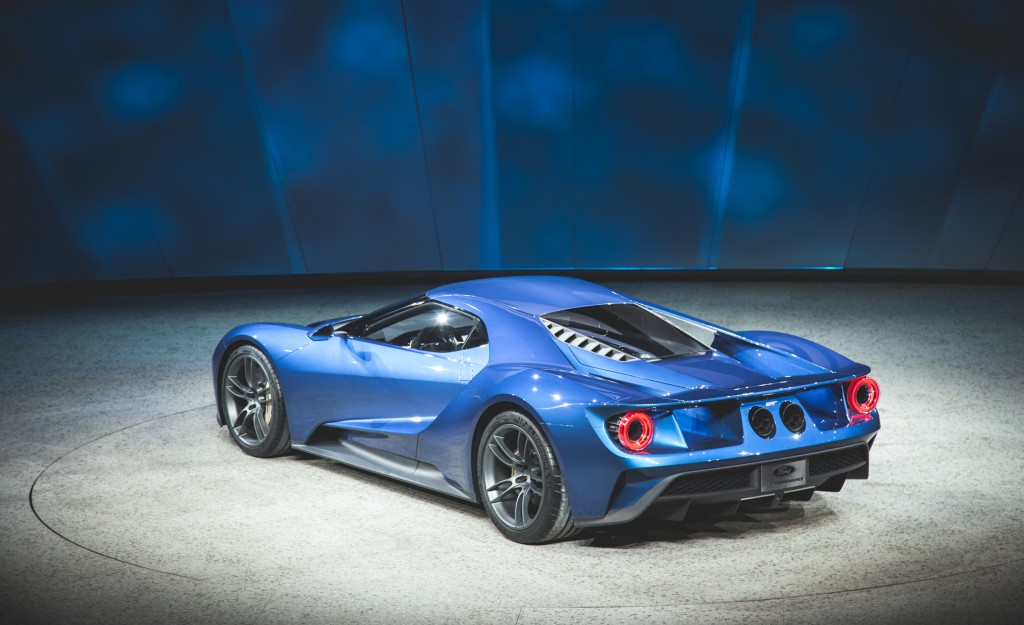 The engine will be set in the middle of the car, and, unlike the P1, will feature no hybrid technology. It’s also likely to end up being pretty damn light, with a body made up nearly entirely of carbon fibre and aluminum, with Ford promising that the car will boast one of the highest power-to-weight ratios in production cars. 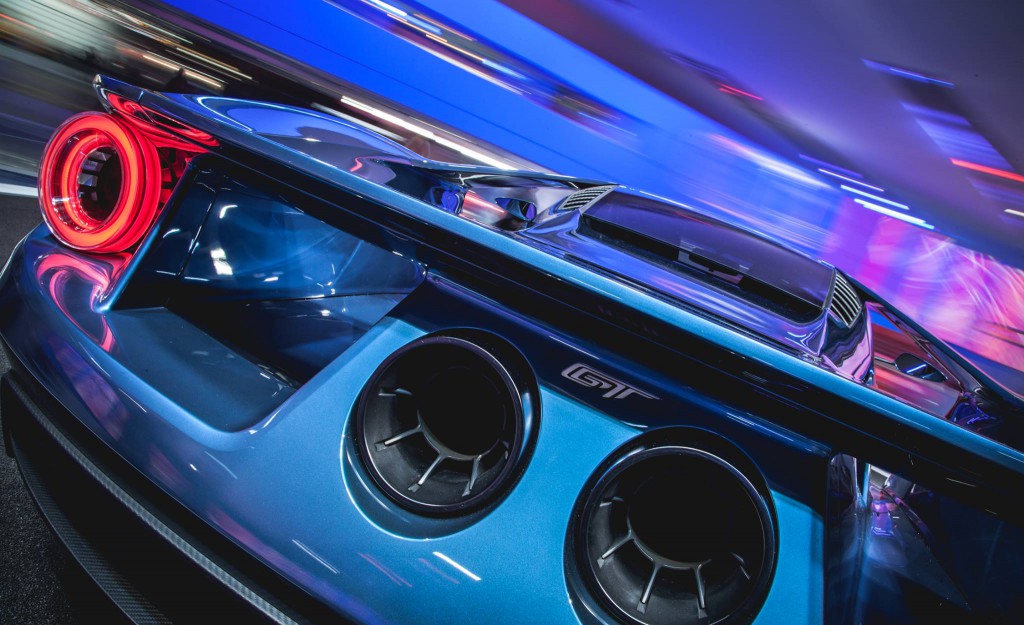 On the outside, some decent aesthetic updates have been performed, with the car being given a thoroughly modern new look. It may not please Ford purists, but the car has been dragged into the 21st Century, with sculpted chunks removed from its body, leaving bare carbon fibre on display, and a more aggressive and hunkered-down stance. Although the design is very different to what we’ve seen before from the GT, lovers of the GT’s classic look needn’t worry – it’s still very much its father’s son, bearing the famed hood vents of the GT and GT40, as well as a body shape still reminiscent of the earlier models. 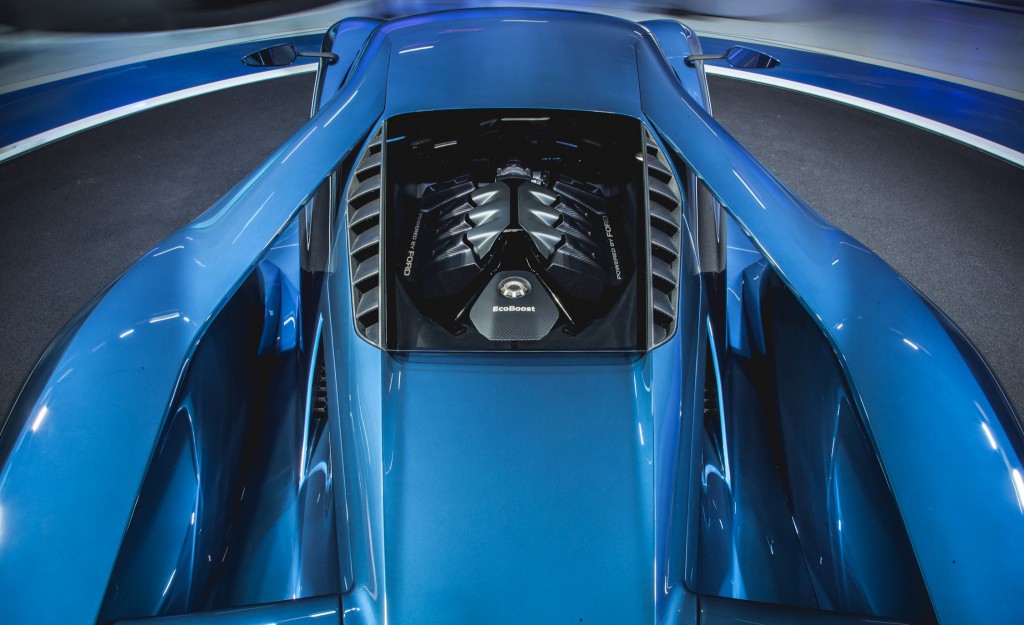 The cabin will seat two people and include an F1-style steering wheel, bearing paddle-shift gears to control the car’s 7-speed gearbox. Other features on the new GT include adjustable ride height, carbon-ceramic brakes, and a deployable rear spoiler.

This new car looks set to proudly continue the legacy of its forefathers, and take the Ford brand back into the supercar arena. It’s been a while since American car companies have been able to produce a supercar on the scale of their international rivals, and the new GT looks like it could be one of the most interesting cars of recent years.

A Peek At The First Ford GT Studio Edition