It’s that time of year again folks, time for the cream of the automotive universe to descend on the small lakeside city of Geneva, Switzerland to show off their hopes for the future. 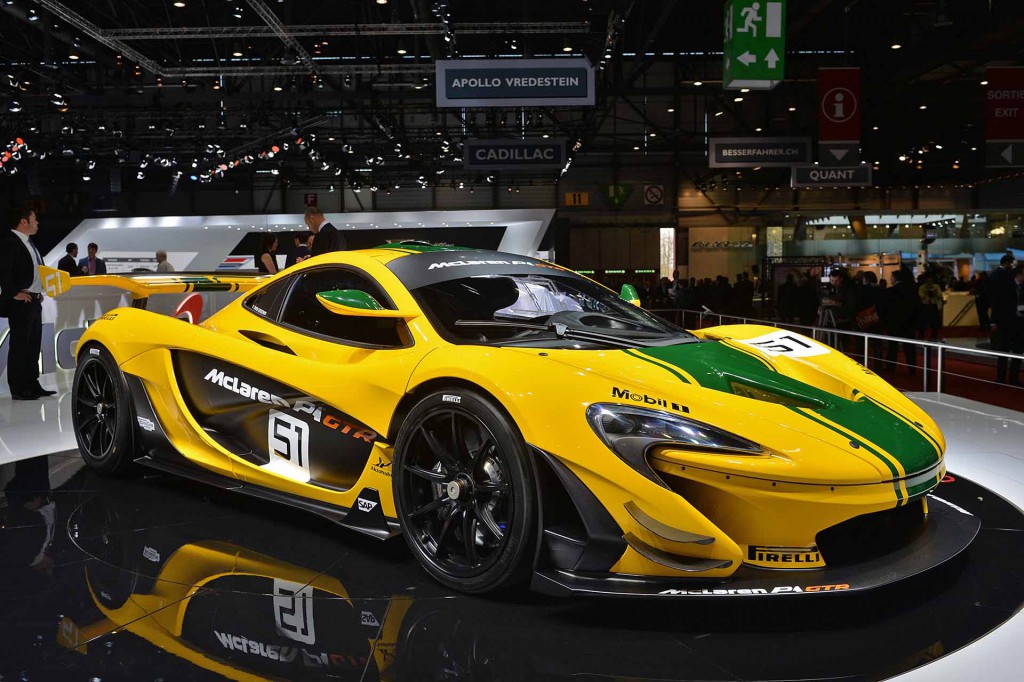 Track-only supercars for the super-rich are an important part of this year’s show, with the production version of the McLaren P1 GTR being shown off, alongside the $2.3 million Aston Martin Vulcan. The P1 GTR’s final production version has changed little from the concept, boasting 987bhp, giving it a power-to-weight ratio of 684bhp per tonne. The car’s racing livery is the same eye-catching yellow and green seen on the F1 GTR back in the 90s.

That’s not all there is to say about its looks either – the car has a huge rear wing to help with downforce, as well as a titanium exhaust system and polycarbonate windows to help with weight reduction. McLaren’s famed focus on aerodynamics has definitely come into play on the P1 GTR, and I can’t wait to see how it performs against its rivals. 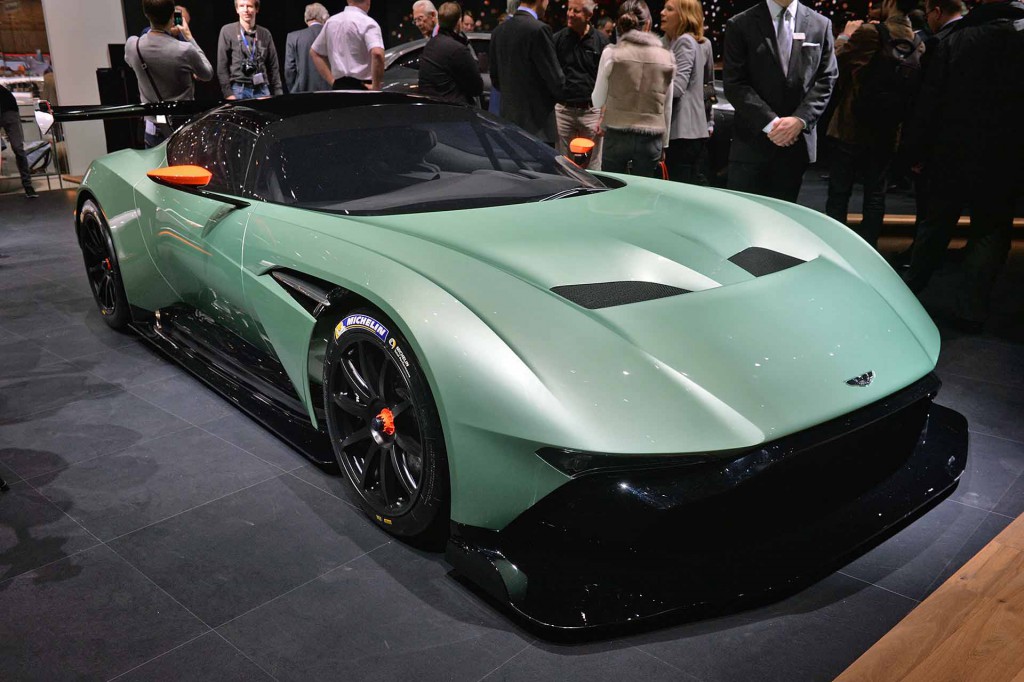 Speaking of which, the Aston Martin Vulcan. This car is going to have even lower production numbers than the P1 GTR, 24 to the McLaren’s 35…but good lord, what I’d give to own one. The Vulcan has a 7L V12 under the hood, and while its figures aren’t yet set in stone, Aston say that it will produce upwards of 800bhp. The car’s braking, traction control, and suspension are all set to be customizable, giving it optimal performance wherever it may go.

On the outside, the car looks like something from a science fiction movie, you half expect it to be able to fly. A lean, muscular hood with two massive vents cut into it leads to the super-stylish yet minimalistic cabin, where drivers find an F1-style racing wheel, behind which protrudes yet another huge rear wing, and reserved brake lights half-surrounded by orange spines. 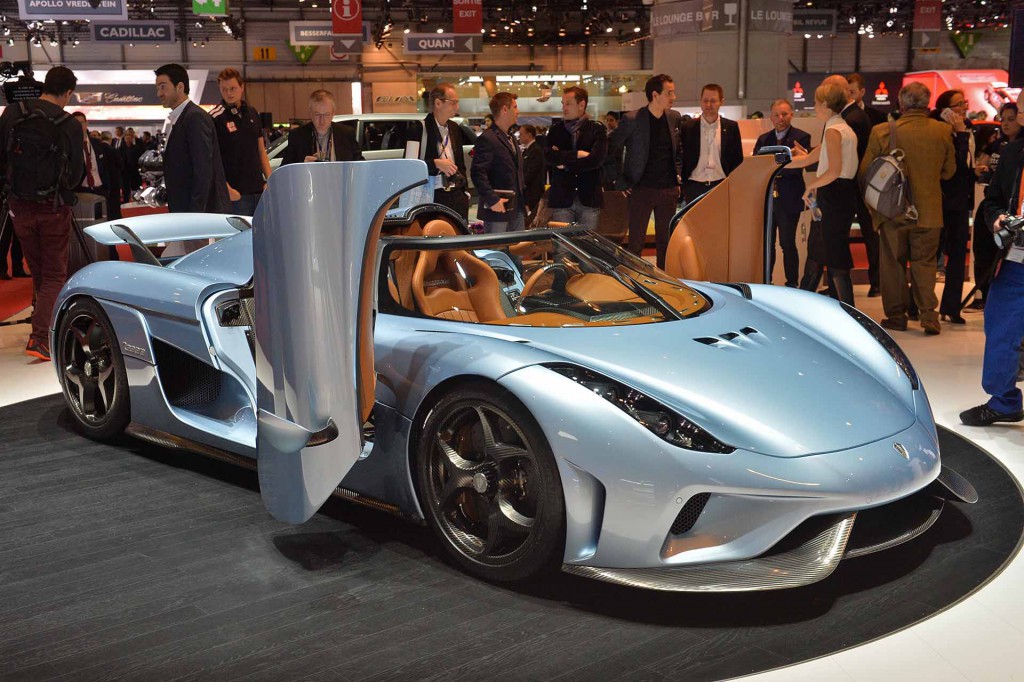 Yet another firm to blow my mind is Koenigsegg, makers of the highly-respected CCX and CCR, as well as the Agera. They’re making some pretty incredible statements about their new car, the Regera. This little monster has a 5L V8 under the hood, combined with three electric motors. The total power output? Over 1500hp, according to Koenigsegg. With a kerb weight of 1628kg, or just over 1.6 tonnes, this gives the car a power-to-weight ratio of around 937bhp per tonne.

If the car stays true to this path, we could have a potential record breaker on our hands. Of course, there’s a price to match, with the Koenigsegg Regera coming in at $1,890,000. 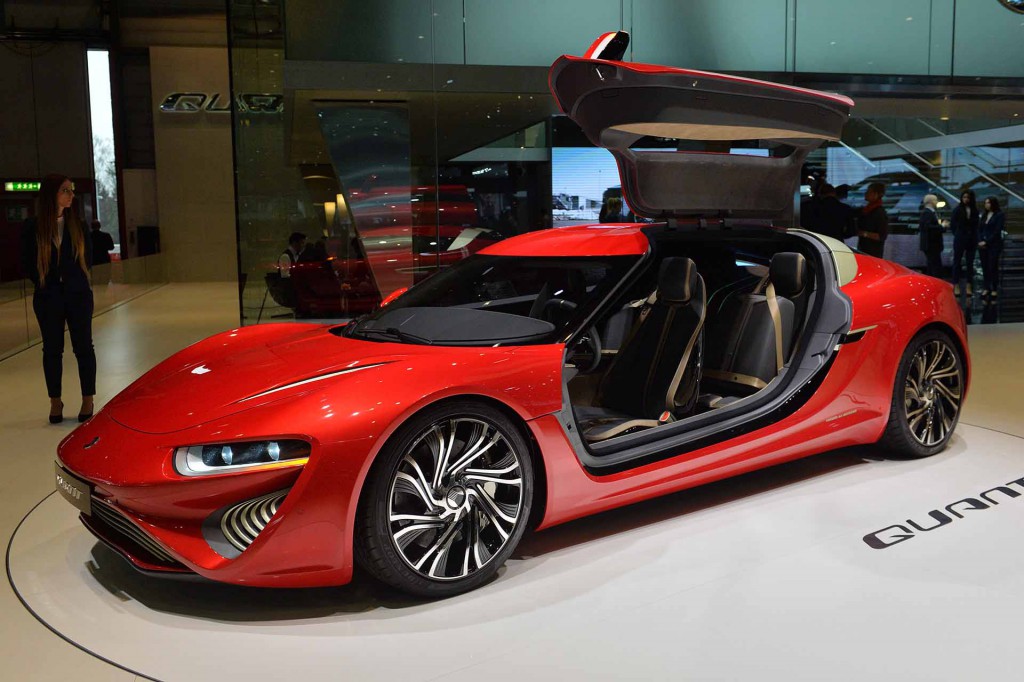 Another interesting car being shown off was the Quant F, produced by the small Lichenstein company of NanoFlowcell. The Quant F is wholly electric, but, if it’s designers are to be believed, this is no ordinary car. The Quant F can allegedly produce 1000bhp, hit a top speed of 186mph, and has a range of 500 miles, which handily crushes the Tesla Roadster’s.

Now, the claims made are extraordinary, but this is from the same company which last year showed off a limosine powered by a salt-water battery, and little has been heard since, bar the car getting approval to drive on European roads. The designer, Nunzio La Vecchia also showed up in 2009 to show the strangely Delorean-esque Koenigsegg Quant, which never progressed further than being displayed at car shows. So, I remain sceptical about the Quant F – if it really is what it promises though? It could be pretty revolutionary. Rolls-Royce have also unveiled a new car at the event, the Phantom Serenity. Inside this new iteration on the Phantom name you’ll find a Japanese-inspired interior made of hand-woven silk, accented with cherry wood. The front seats will remain bound in white leather, with the car also boasting mother-of-pearl in its long-list of expensive components. It’s a look that will probably divide audiences, with some finding it suitably luxurious, while others may find it chintzy. No one can deny however, that it’s a bold move.

Under the hood, you’ll also find a direct-injection V12 engine, partnered with an 8-speed automatic gearbox. The car will likely not have a very high top-speed however, but why would it need it? As the name suggests, this is a car to regally swish around in, not to race in. 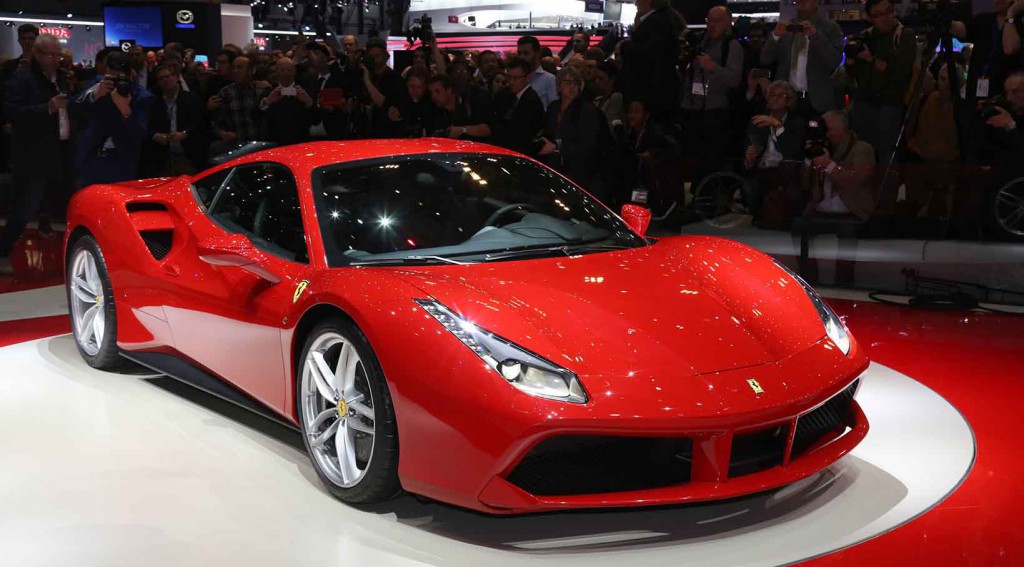 Following a February reveal, the successor to the Ferrari 458 for sale, the Ferrari 488 GTB, has been premièred. The new car shares some characteristics with the older machine, but also comes with a reduced engine size, down to 3.9L from the 458’s 4.5. Although this may seem slightly disheartening to some, particularly those who grew up reading about cars with 6 and 7 litre engines, it’s important to remember that great things can be achieved with small engines. Just take a look at the McLaren P1, which comes with an even smaller combustion engine, weighing in at 3.8L, yet that car still makes some magic out on the roads. In actual fact, the new twin-turbo engine is actually more powerful than the 458’s, generating 661bhp, with 0-60 taking just 3 seconds.

Outwardly, the 488 doesn’t greatly differ from the 458, but aerodynamics have been put in pole position when it comes to the design. The car boasts a large front splitter, and new air intakes behind the doors. A new rear diffuser has also been installed, with these and other improvements increasing downforce by 50%. This new beast is set to be available for the 2016 model year. 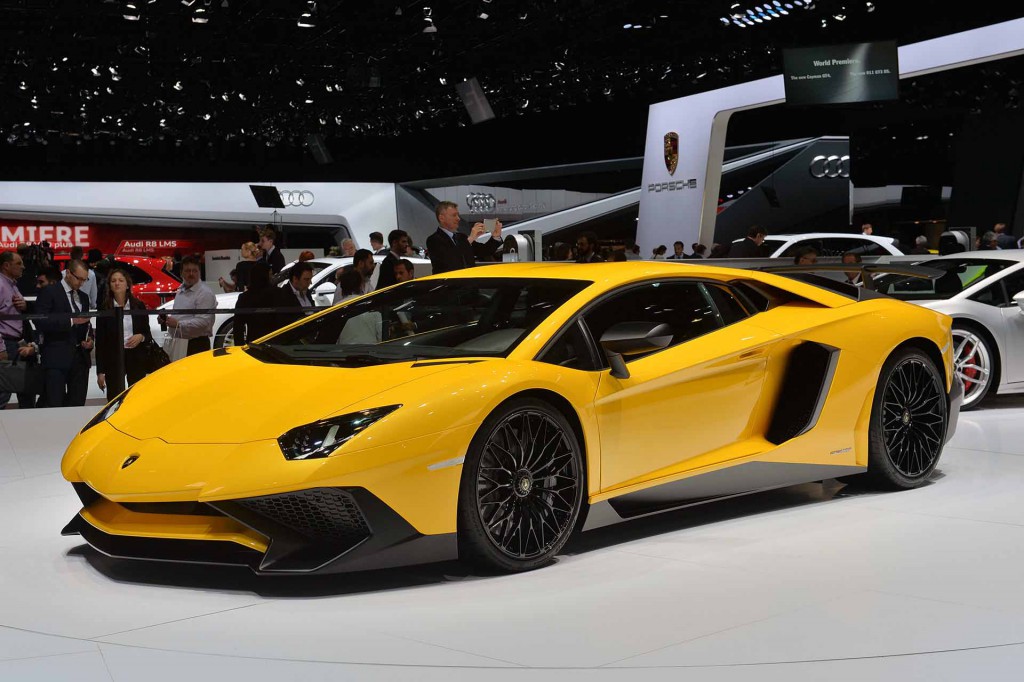 Not to be outdone, Lamborghini also unveiled a new car at the show, the Lamborghini Aventador LP 750-4 Superveloce, because nothing says speedy like a name that takes minutes to say. While Ferrari may be scaling down their engines, this Lamborghini does nothing of the sort. Under the hood of this carbon fiber behemoth, you’ll find a gargantuan 6.5L V12, producing 740 horsepower, and hitting a top speed of 217mph. Not only this, but it also blazes its way to 60mph in under three seconds, breaking through that barrier in just 2.8 seconds.

The Superveloce is 50kg lighter than the standard Lamborghini Aventador for sale, with the chassis being made of a mix of carbon fiber and aluminum, with the doors and seats composed entirely of carbon fiber. The car also boasts AWD, and a whole host of systems help decrease wheelspin and allow torque distribution. Combine this with improved aerodynamics, and the Superveloce looks set to be a fantastic incremental improvement over the standard Aventador. 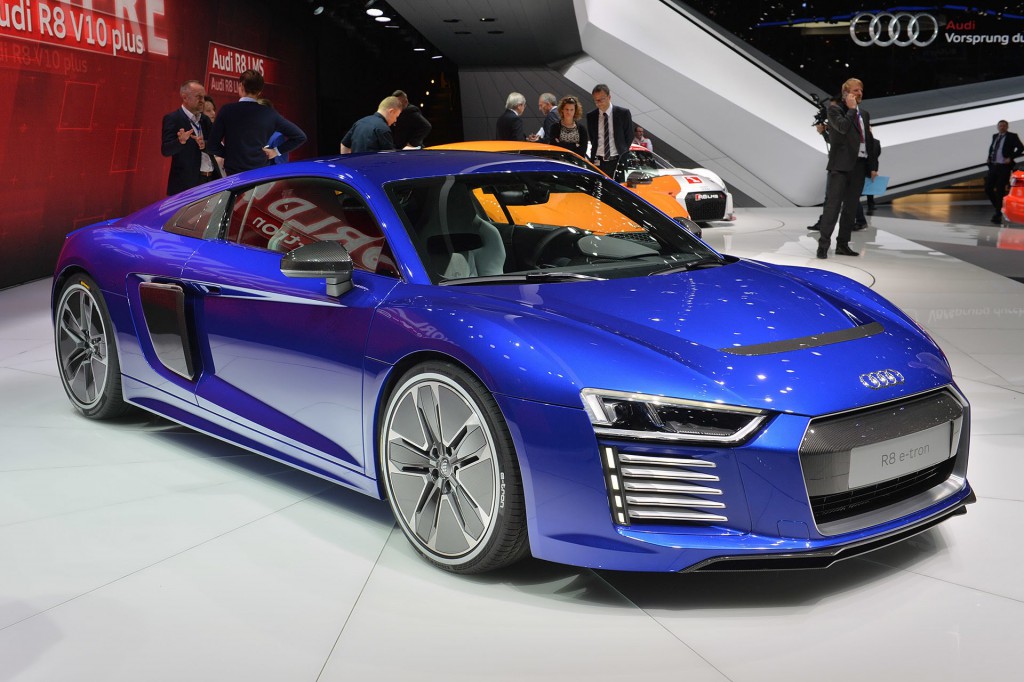 Following on from the success of the BMW i8 for sale, another German manufacturer has decided to get in on the electric action, with Audi unveiling their new machine, the R8 e-tron. The R8 e-tron isn’t strictly new, however, having been shown off as a concept in 2009, but never making it to production. The new iteration of the machine goes further than the Beemer, with all power coming from two electric motors.  The car generates 456 horsepower, and can keep going for 280 miles. The top speed matches the BMW, at 155mph, and it can hit 60 in just 3.9 seconds, a considerable increase over the original e-tron. 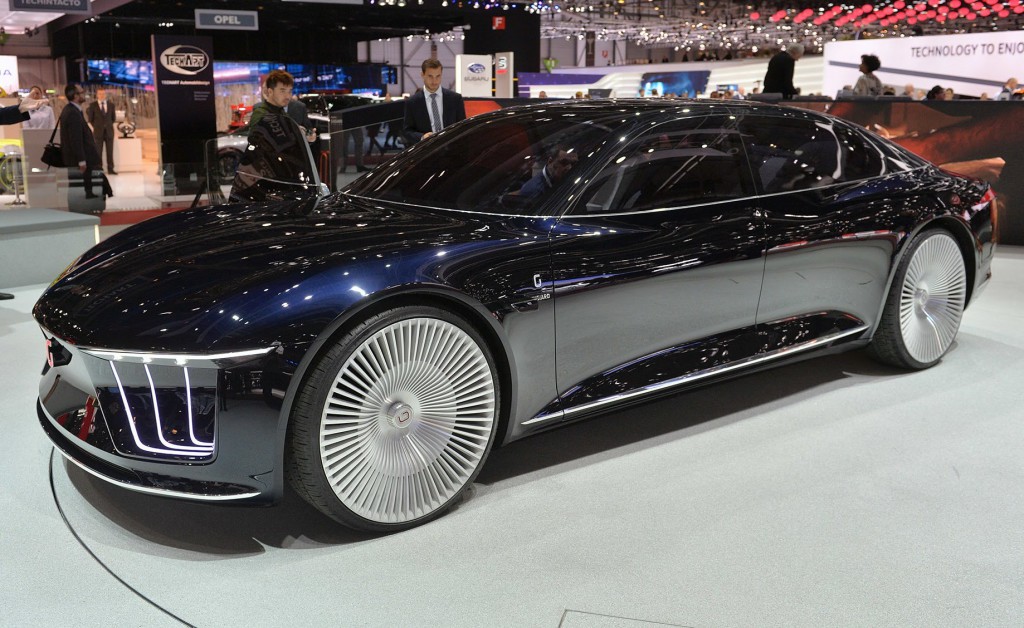 Meanwhile, Italdesign, creators of the beautiful BMW M1 of the 1970s, as well as the Lancia Delta, and the Alfa Romeo Alfasud, amongst many others, have shown off a luxury car of the future in the shape of their new concept, the Giugiaro Gea. The car is nothing short of stunning, looking like the sort of thing William Gibson would have dreamed up had he turned to car design. The car’s lights look like ripples produced on a neon ocean, whilst self-driving capability allows the car to whisk passengers around, should the driver wish to take a break.

The car sits upon four massive wheels, with the body sitting squat to the ground, resulting in a futuristic, stealthy profile. Inside, users can choose from three settings to configure the interior, with one bearing the mysterious name “dream mode”. Four electric motors allow the concept to reach 155 mph, and produce 764 horsepower. It seems doubtful that the car will ever be anything more than a concept, but a man can dream. Time to engage dream mode, and wish for a day that these black polished monsters went into full production.